The morning began very early on Monday with a Pastors’ morning prayer group. They were mostly all known to us already, so we were incorporated right into the prayer circles rather than having to be introduced first. That was kind of special as it allowed us to minister with them to each other as peers instead of being set apart as the unique visitors from the States! Interesting note was that they separate men and women into two different prayer circles. Dave at least had a translator or two among the men, but I found myself surrounded by pastors’ wives who spoke almost no English! Thankfully, I can understand a bit of Spanish, but it was stretching at best! We found an amazing thing, though, as we prayed. When I prayed with the women, I just prayed as the Spirit led, and Rosa (Pastor Jesús wife) prayed right along with me in Spanish. We’re still not sure whether or not the Lord was giving her interpretation of what was being prayed! The only thing we know is that we could see the Holy Spirit moving on the women and bringing peace to their hearts….in the midst of great physical, spiritual, and emotional challenges for them. 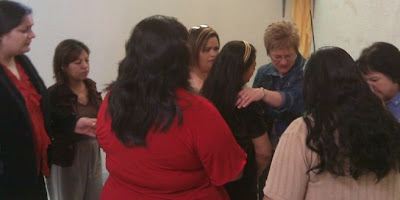 Another lunch followed that meeting, as is the custom here. The twelve-alarm chili was good when you could get past the choking, burning lips, and gasping….all done discreetly, of course, while declaring “Muy Rica!!)!! One could say it was “tasty”! This church meets in a lovely building that also contains a rather sizeable Christian bookstore – all Spanish, of course – where I couldn’t resist buying a new travel-sized Spanish Bible….and two new worship CD’s…Dave thought I was a bit crazy, but it made sense to me! If you can find the reference, they can read the verse, and it makes sense to the one who needs it!

We met with Gerardo Espejel later in the early evening at his office near the beach in Rosarito. Unfortunately, a dense fog had rolled in, so there wasn’t much visible of the beach THAT day! Many of you may remember meeting Gerardo when he was with us in Omaha earlier in the Spring. He is working among the churches here to plan the “Marked For Life” campaign during this next year in Tijuana. There are a number of events leading up to that on Easter weekend 2010, that will be building outreach and evangelism training, particularly into the youth of the city. Although there have been unanticipated obstacles in the timeline of this program, it would seem that the Lord has been adjusting it so that it will fit His plan better than ours. There will be well over 30 churches initially represented at training, and the official permission has been received just this week to begin to hang the banners on the overpasses of the highways around the city. They are being allowed to put them into what is normally a “restricted zone” where no one is allowed to post any advertising! This is nothing short of a miracle! The target area initially will include one of the most traveled loops in the city, so they expect to be adding churches continually who wish to sponsor another banner in a different location in the city. Those can be sponsored for approximately $75 – which represents a very large sacrifice for many of these congregations. Gerardo and Jesús are very encouraged with the progress being made, as there are doors opening that will last far beyond the specific “Marked” event. Continue to pray for increased unity among the churches here…that is a big issue at the present time.

Today will include a morning meeting with another group of pastors, a prominent businessman in the city, and the Orphanage Director for CFCI (Eduardo Mendez). We are being allowed to attend primarily as guests, and likely to announce the SUTL training scheduled for Saturday with Pastor Lincoln. It already appears that there will be over 100 pastors and youth leaders here for the seminar. We’re passing out sample booklets in Spanish (both adult and childrens’ versions) to all the pastors we come in contact with, and giving them a spare copy to use as an invitation for Saturday. Pray that this training time is a huge advancement in the equipping of the Body of Christ here in Tijuana. Later this evening, we’ll cross the border into Chula Vista again to spend the evening with Gerardo and his wife Rosa.

Not quite sure what tomorrow holds yet…. Pray for continued strength and energy. We both slept like rocks last night, and Dave has been doing quite well physically. We can sense your prayers, and although the people seem tired, there also seems to be a “lightening” of the spiritual atmosphere here. Please continue to pray that darkness will be pressed back and that this city will be transformed….along with our own!